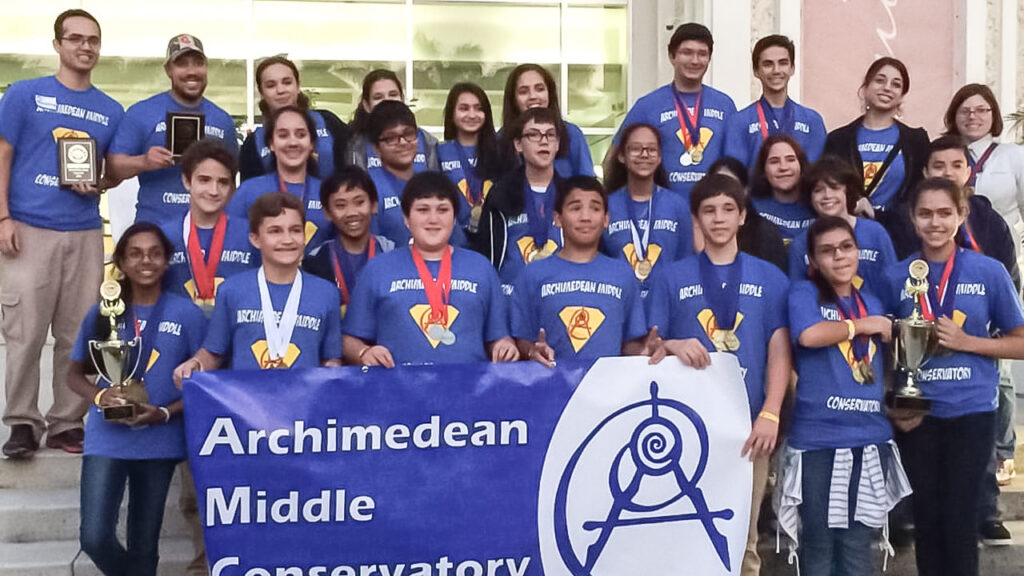 Boca Raton, FL (FAU). It was another stunning day for the Archimedean Middle Conservatory Science Olympiad teams, as they were able to win 1st and 2nd place overall at the regional competition for the second year in a row.

This year’s competition, held at Florida Atlantic University, was fiercer than ever with 8 new teams ready to compete for a bid to the state competition. AMC’s teams, named after Greek heroes –Achilles, Heracles, and Perseus- were more than up for the challenge. Like the heroes of yore, they competed honorably and displayed excellence in all their labors.

Key in this year’s victory was the dedicated group of coaches who, along with Mr. Mendez (8th-grade Philosophy), spent each day trying to bring out the excellence of each individual competitor. These coaches are Mrs. Mendez (7th grade Science), Ms. Daglio (6th grade Science), Ms. Borgmann (6th-grade Mathematics), Mr. Chin (Physical Education), and Ms. Romaguerra (7th grade Philosophy). Special thanks need to be given to all the parents who provided support to the school and the team. Not to be forgotten is the principal of the school, Ms. Moysidis, who embodies ἀρετή, by showing all the students that excellence comes from persistence, determination, and patience.

Now, Archimedean will look to the state competition, hosted at the University of Central Florida on March 19, to display their best efforts in hopes of becoming state champions once again.