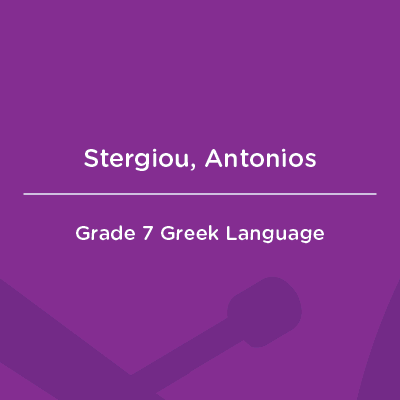 Antonios Stergiou has been teaching the Greek language at the Archimedean Upper Conservatory since 2017 and at the Archimedean Middle Conservatory since 2020. He was born in Serres, in northern Greece. He has a Bachelor’s Degree in Classics from the Aristotle University of Thessaloniki and a Master’s of Arts in Linguistics and Literature. He has been teaching Greek language and literature from 2001 in public schools in the city of Xanthi in several schools where students are non-native speakers. He has been involved in various pilot projects of teaching the Greek language and literature to non-native speakers and organized several school projects about ancient Greek drama through gender studies. Through the years he has written several articles about literature and linguistics in Greek literary journals and a chapter of the collective book “Soon, we are getting stronger” with regard to the teachers’ experiences in teaching literature. He is planning to impart his love for the Greek language to the students of the Academy and instill in them the best elements of Greek culture. He also intends not to only teach, but also to be taught by the new students and the new country.