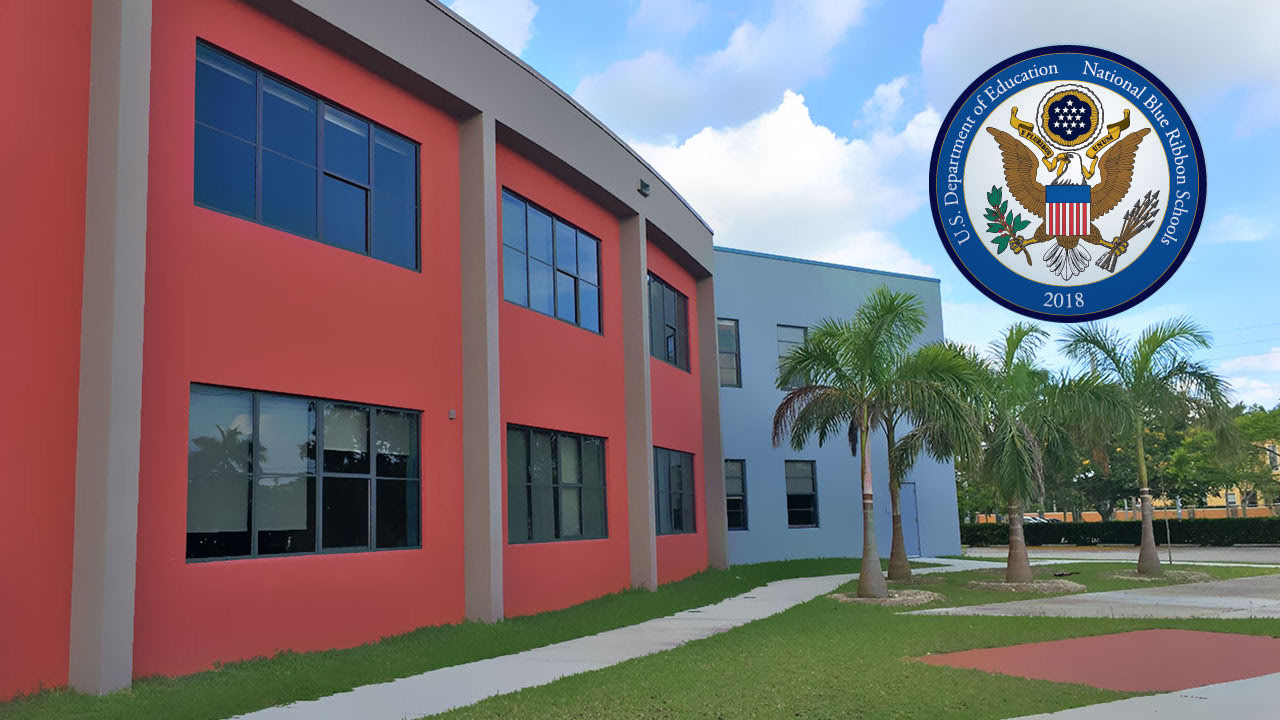 D Dear Archimedean Schools Community,
I am happy to share with you the wonderful news of the two awards received by our Archimedean Upper Conservatory (AUC)and its Director, Mr. Demetrios Demopoulos.
First, our AUC was awarded its first Blue Ribbon Award 2018 by the US Department of Education. AUC was one of 349 schools, one of 12 schools in the state of Florida and the only high school in Miami-Dade County among more than 100,000 public and private schools in the US at the elementary, middle and high school level, who were considered for the award based on state assessments. In order to receive such a recognition, the awarded school had to meet very high standards on performance of all of its student-subgroups for five consecutive years. This award for AUC shows that it cares and achieves sustained success and improvement for all of its student-subgroups based on academic performance, demographic and socioeconomic criteria. For the first 10 years of operation, AUC is known for its impressive top University placement of its graduates, its high national rankings and its academic competitions achievements. The Blue Ribbon award shows another aspect of its capacity and role as a fair and caring academic institution. Several student cohorts are responsible for the sustained performance and need to be commended. Undoubtedly, all of its dedicated and talented Faculty and its Academic Leadership of Director Demetrios Demopoulos and Assistant Director Olga Bardoutsos contributed tremendously towards this achievement.

SSecond, the AUC’ Director, Mr. Demetrios Demopoulos received the 2018 Terrel H. Bell Award for outstanding leadership. He is one of eleven Principals/Directors among the 349 academic leaders of the 2018 Blue Ribbon Schools. It is a great honor for Archimedean Schools to have one of its Academic leaders receive such a career award. Mr. Demopoulos, the first Faculty hired by Archimedean in 2002, exemplifies the dedication to his students, quiet confidence and extraordinary talent of several of our people. It is also remarkable that Mr. Demopoulos achieved this milestone of his career as Director while teaching two courses per year and for the last eight years, for the benefit of his AUC students and without any additional compensation from Archimedean.

On behalf of the Archimedean Board, I would like to congratulate Mr. Demopoulos, Assistant Principal Olga Bardoutsos and the entire organization for supporting and contributing to these two successes. Archimedean has now three Blue Ribbon Schools: Our Academy and our Middle Conservatory received their Blue Ribbon Award in 2011. It is time to start thinking about the next three Archimedean Blue Ribbon. awards.

Dr. George Kafkoulis
President & Chairman of the Board of Archimedean Schools (a volunteer)
Associate Professor of Mathematics
Florida International University

The AA and AUC Chorus at the 2019 Merrick Festival Caroling Competition
December 10, 2019